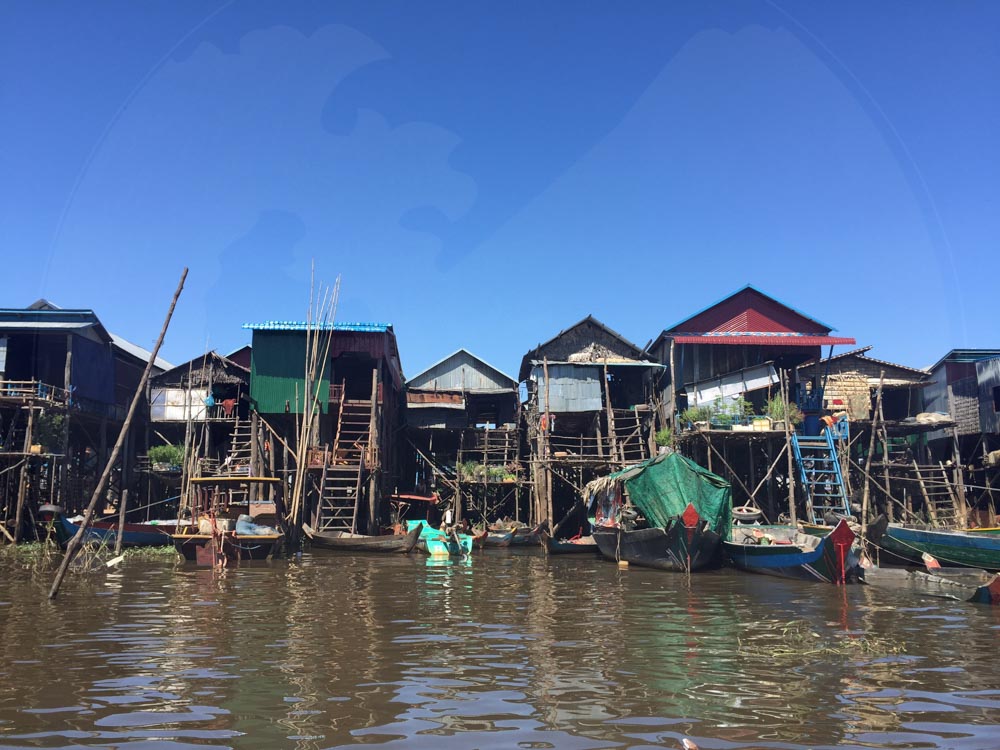 Kampong Phluk is a flooded village of perhaps 700 stilted houses located around 30km from Siem Reap city, which about an hour by car to get there.

During there dry season from January to March egrets (herons) migrate from Prek Toal Bird Sanctuary, 50km south west and come to Kampong Phluk to feed on the fish.

As the ware level continues to decrease the houses, built from Cambodian jungle hardwood, on poles 8 to 12 meters high look outrageously high compared to the water. In fact during this time the villages built some more temporary structures only 4 meters off the river bed, perhaps 3 to 4sqm, where they stay for a few months attending the fish farms. When rains return and the water rises they dismantle these houses and move back to the higher ones.

Each house is home to a family often of between 4-8 people who’s living derives from traditional lake fishing and fish farming close to the house.

Along the way we can view the countryside, local villages, cows, water buffaloes and other sights.

Getting to Kampong Phluk

As there is no bus service, get a tuk-tuk car or minivan from around an hour or more from Siem reap, then jump on a motor boat for about $20 a person, more if you want to go alone.

Along the way you will see a flooded school, flooded pagoda, flooded jungle, fish and crocodile farms. For the more adventurous you can get a smaller boat, paddled by a local for about $5 per person which will take you from the edge of the jungle to within.

Once in the jungle you get a feeling of what it’s like for the local fishermen, and get to see the the strange creatures living there. These paddle boats can take you much closer to the houses in the wet season.

This website uses cookies to improve your experience while you navigate through the website. Out of these, the cookies that are categorized as necessary are stored on your browser as they are essential for the working of basic functionalities of the website. We also use third-party cookies that help us analyze and understand how you use this website. These cookies will be stored in your browser only with your consent. You also have the option to opt-out of these cookies. But opting out of some of these cookies may affect your browsing experience.
Necessary Always Enabled
Necessary cookies are absolutely essential for the website to function properly. These cookies ensure basic functionalities and security features of the website, anonymously.
Functional
Functional cookies help to perform certain functionalities like sharing the content of the website on social media platforms, collect feedbacks, and other third-party features.
Performance
Performance cookies are used to understand and analyze the key performance indexes of the website which helps in delivering a better user experience for the visitors.
Analytics
Analytical cookies are used to understand how visitors interact with the website. These cookies help provide information on metrics the number of visitors, bounce rate, traffic source, etc.
Advertisement
Advertisement cookies are used to provide visitors with relevant ads and marketing campaigns. These cookies track visitors across websites and collect information to provide customized ads.
Others
Other uncategorized cookies are those that are being analyzed and have not been classified into a category as yet.
SAVE & ACCEPT
Scroll To Top